Vibrators are the equipment most frequently used at present.

They are relatively economical and practical use.

They can be circular or linear (rectangular).

The vibration of three-dimensional type ; this is a rotation about a horizontal axis, generating a spiral shaped torus.

For circular vibrators, the vibration generator comprises a motor with a vertical axis, a spring assembly holding blocks and eccentrics. 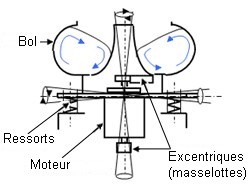 For linear vibrators, The vibration generator comprises a motor with a horizontal axis, a spring assembly holding blocks and eccentrics.

The adjustment of the angle between each eccentric blocks, and their mass determines the amplitude and vibration mode.

Their capacity is defined by the volume of the tank (in general, covered with a plastics material, often polyurethane, to reduce the shocks between the metal parts and the structure of the tank).

N & rsquo; please describe the difficulties that we can guide you.