The main lines of the polishing chips [1] magnetic (or deburring) 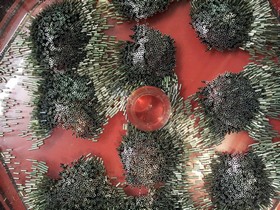 
The idea is to generate a relative movement between the magnetic media and parts.
Magnetic media are set in motion by a magnetic plate (or more complex rotary motion) ; coins should generally be composed of non-magnetic material (or weakly).

For operations & rsquo; deburring, it is possible to & rsquo; perform treatments dry low duration, but in general, it is better & rsquo; be wet for reasons of & rsquo; rapid heating that may damage the bowl or the bowl, as well as the parts.

Mostly, l & rsquo; deburring is performed on the basis of & rsquo; mechanical action and nonabrasive ; c & rsquo; so is the media passage just, after several passages, weaken the d & rsquo section; burr hooks to release the.

Finally, this technology can also be used to perform a polishing chips [1] by correctly choosing the size of the magnetic media (in general, d & rsquo; a smaller diameter) or by reducing the speed of rotation.

The amount of media to use depends on the size of the vessel but also the size and quantity of the workpieces ; l & rsquo; s goal is to ensure that the media come in contact with many targeted areas of parts.

A media failure will increase the cycle time ; On the other hand, an excess slow movement in the vessel.

The cycle times are relatively short general (less of 30 minutes) and the generation of & rsquo; n & rsquo oxides, is not very important ; more, sometimes it may be necessary to perform a rinse cycle end and replenish with clean water and additive to properly clean the surfaces of the parts. In some cases, it may be necessary to repeat the operation by changing the process water and adding the additive.

For more information on the hardware : some examples of magnetic centrifuges. [4]